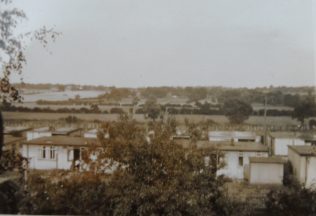 Extract from Winston Churchill's March 1944 speech 'Our greatest effort is coming', read by Neil Titley
Neil Titley
Rebuilding Dover
Includes film of prefabs about 7 minutes in
Houses at Speed
Huts for the Homeless
Seco huts under construction
A Home of the Future
Prefabs 1948
AIROH prefabs assembled in Baldock, Hertfordshire 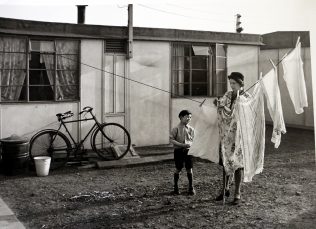 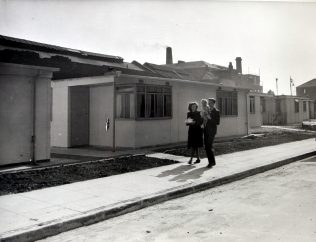 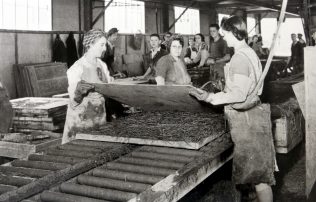 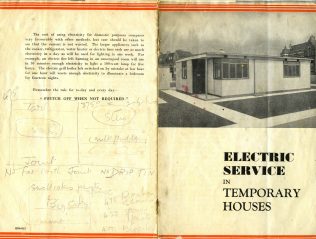 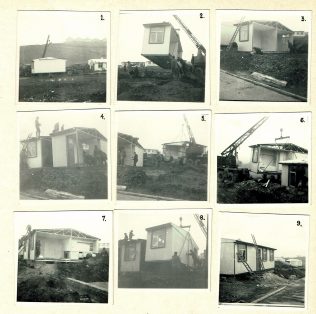 The Prefab Museum is a living history online museum about Britain’s post-war prefabs. Part of the Temporary Housing and Emergency Factory Made Homes programmes, 156,623 prefabricated buildings were erected all over the UK between 1945-8 to rehouse ex-servicemen and their families or bombed-out people. View or download the Prefab Museum Education Pack here.

In 1942, following the Blitz, the Burt Committee was set up by the wartime coalition Government to provide guidance on the housing shortage. The committee recommended temporary housing as a solution to the shortage of construction workers and the destruction of housing in the Blitz. They aimed to accommodate servicemen returning from the war, people made homeless by bombing, or living in overcrowded and insanitary conditions. Read about the politics behind the prefabs here.

As early as 1941, local authorities had been meeting to discuss proposals for prefabricated sectional bungalows to be stored at key points across the country.  Source HC Deb 16 February 1944 vol 397 cc187-8W 187W

In March 1944, Winston Churchill broadcast a speech titled Our Greatest Effort is Coming in which he mentioned prefabs as a solution for re-housing servicemen coming back from the war and their young families. D-Day hadn’t even happened, nor the infamous V1 and V2 attacks and Churchill already promised the building of 500,000 of these new all mod-cons cottages.  You can read the full text of the speech here or download at the bottom of this web page. The part dealing with prefabs is titled Million Homes Destroyed and was kindly read and interpreted in July 2013 by actor Neil Titley known for his Oscar Wilde shows.

Where were they located?

Prefabs were located on bomb sites and open spaces including parks, in rural locations, towns and villages, and were scheduled to be dismantled and replaced after 10 to 15 years. They lasted much longer as thousands are still standing, lived-in and cherished over 70 years later.

People tell us about locations of prefabs all the time. But many have been demolished or are under threat of demolition to be replaced by modern dwellings and flats, which in most cases are not reaching the standards of the 1946 luxurious bungalows! Research and planning went into their development, how best to address the housing crisis caused by the devastation of war, the shortage of skilled construction workers who had been called up or on other war work and being able to provide semi and unskilled work for returning troops.

The result was the ‘prefab’ which was made of prefabricated parts and could be put together and erected by semi and unskilled workers.

The first fully fitted prefabs to be erected were the American UK100 prefabs supplied to the UK under the Lease Lend programme from the United States. When Lease Lend came to an end in the summer of 1945, domestic prefab production stepped up.

How did this extraordinary endeavour take place? Thanks to a document at the Chiltern Open Air Museum archive there is a timeline of events from 1944 to 1947, from the perspective of one local authority the Amersham Rural District Council. Local authorities were given extensive powers of compulsory purchase, from empty homes to bomb sites to vacant land, on which to place the prefabs. They applied for the number of prefabs they needed to the Ministry of Works and were given a deadline of December 1945 to secure the sites. Plans were submitted for approval to the MoW for the layout of the prefabs, and the sites were prepared to receive the prefabs. This included roads, utilities and drainage, and preparing the bases. It also included clearing and levelling bomb sites. When completed, the sites were handed over to the Ministry of Works who organised the delivery and erection of the prefabs.

Apart from the AIROH B2, which was cast in four sections, most of the prefabs were partially prefabricated and had hundreds, sometimes thousands, of components. The Arcon MkV comprised 2,500 components, supplied by 145 manufacturers. Delivery of the hulls  and components was managed by the Ministry of Works in conjunction with large construction companies like Taylor Woodrow and Wimpey. A further programme of Swedish timber prefabs adapted to Ministry of Works’ specifications was undertaken to provide homes in mainly rural areas of England and Wales, with a separate programme for Scotland. You can read about these houses here and see the location list here.

It is unique as the only period when central government took control of new public housing rather than providing loans, subsidies or grants to local authorities to build.

The Minister of Works, speaking in the House of Lords on October 5, 1944, summed up the proposed operation of the temporary housing scheme: ” The Government are to acquire and own the houses, but to the utmost possible extent the whole scheme will be treated as part of the housing operations of the local authorities. The bungalows will be put up on sites chosen, acquired, and developed with the necessary roads and sewers by the local authorities. The local authorities will choose the tenants, fix and receive the rents and make an annual payment to the Health Minister, the amount of which will be determined in accordance with the provisions of Clause 3 [of the Act].”

The Minister of Works to obtain 10,000 huts of various designs which could be speedily erected: these are not to be regarded as houses, but as temporary shelter.


The history of Social Housing, University of the West of England :