You are here: HomenextHistorynextA short history of prefabrication

A short history of prefabrication 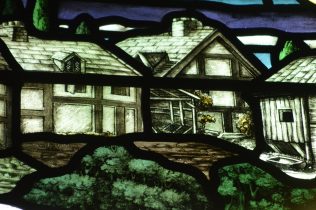 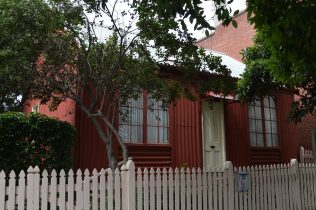 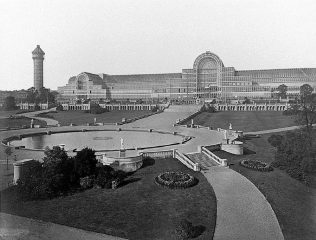 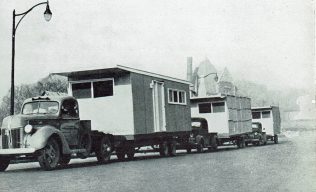 Prefabrication is a method of producing standardised components off-site in a factory or workshop, that can be fitted together on-site. The components can be shipped flat packed or partially assembled and are not subject to fluctuating weather conditions when they are manufactured.

From the burnt clay bricks of the Mesopotamian civilisation to the ancient Romans who used concrete moulds for their aqueducts and tunnels to William the Conqueror who brought prefabricated sections of defences with him when he invaded England in 1066.

As early as 1624 the English brought with them to Cape Ann a panelized house of wood for use by the fishing fleet and that this house was subsequently disassembled, moved, and reassembled several times. (1) This appears to be the first example of a ‘demountable’ house, one that can be assembled, deconstructed and reassembled.

David Thomas emailed the Prefab Museum with photos of stained glass windows in the Guildhall in Derry/Londonderry, now a tourist attraction open to the public.  David wrote:

“It has stained glass windows and one small section caught my eye, showing some old houses with the wording “Framed Houses sent from London 1609.” What was later to be called Londonderry was captured by the English initially in 1566, but not held for long. It was recaptured in 1600 and a ‘new town’ was set up in 1603, to be destroyed in 1608. After Londonderry was destroyed in 1608 the English re-took the site. The immediate need in 1609 was to put up strong stone fortifications. But there was also a need for buildings. Rather than divert resources there to doing that, the wooden frames of houses (and of stores) were sent over from England, to be assembled at Londonderry. So indeed sort-of prefabs.”

The 19th century and industrialisation

Prefabricated farm buildings and bungalows had been available since the early 19th century. Henry Manning, a London carpenter, produced the Portable Cottage in 1837 for export to Australia.

The California Gold Rush of 1848 saw imports of prefabricated houses from Britain, Sweden and China arrive to house the 49ers.

David also sent photos of an iron prefabricated house in Melbourne, Australia, which was manufactured and shipped from Britain in the 1850s. Many of these prefabricated iron buildings were manufactured by E T Bellhouse, at the Eagle Foundry in Manchester. The Crystal Palace, erected for the Great Exhibition of 1851 in Hyde Park, comprised prefabricated cast and wrought iron columns and girders, wooden frames and glass frames that were assembled on site. It was later moved to Sydenham so truly demountable!

Simultaneously, prefabricated ecclesiastical buildings, commonly known as ‘Tin Tabernacles’ were manufactured. Towards the end of the 19th and into the 20th century, village halls were constructed from the same galvanised iron.

After an appeal to the British Government by Florence Nightingale about the poor state of military hospitals, Isambard Kingdom Brunel designed Renkioi, a prefabricated wooden hospital that was shipped to the Dardanelles.

In the latter quarter of the 19th century the Germany company Christoph & Unmack was producing prefabricated timber buildings for export.

20th century and experimentation with concrete

From the turn of the 20th century the American company Sears Roebuck supplied ‘Modern Homes’ mail order kit homes across the USA, along with several other companies.

In Britain, the engineer John Alexander Brodie was at the forefront of promoting precast reinforced concrete as a building material that could produce houses quickly and cheaply. He also invented the football net! Brodie was the city engineer for Liverpool and erected the first experimental houses in Eldon Street in 1903. Brodie exhibited at the Cheap Cottages exhibition in Letchworth, Hertfordshire, in 1905.

The motor manufacturer Austin, based in Birmingham, had to take on more workers during the First World War and in 1917 imported 200 prefabricated cedar bungalows from the Aladdin Company of Bay City, Michigan to house them. The Austin village survives as a conservation area. In other areas, prefabricated wooden ‘hutments’ were erected to house workers in the armaments factories. They were very basic accommodation, but some lasted until the 1950s.

After the First World War, Britain needed to make good on its ‘Homes for Heroes’ pledge. A shortage of bricks and bricklayers and a surplus of steel encouraged innovation in building using  partial prefabrication. 10,000 of the steel framed Dorlonco houses were erected between 1920 – 28, and 3,000 of the timber framed Weir houses. Neither have stood the test of time well, and interest in developing prefabrication in Britain waned in the late 1920s.

In the 1930s, the Tennessee Valley Authority developed the ‘truckable’ house, prefabricated in sections and transported by road to the site, where the sections were put together. They left the factory with all electric, heating, and plumbing equipment installed, and arrived at the site completely finished even down to light bulbs and screens. Houses were finished at the site in as little as four hours by bolting together two or more sections. (1)

There were also technical developments during this period which deserve brief mention here: the progress in plywood manufacture brought about by improvements in glues and veneer cutting; the better utilization of wood seconds and wood waste to make plastics, wallboards, and hardboards; the expanded production of other sheet materials made from gypsum, asbestos, cane fiber, newspaper, etc.; the development of sheet steel and the continuous strip and cold-rolled processes; the improvement in alloys, especially of the light metals; and the treatment of cementitious materials by vibrating, aerating, and use of lightweight aggregates. (1)

Also in the 1930s and 1940s a number of experimental houses were created including copper faced houses. A number were exported to Haifa, Israel, where some still stand today.  The metal worker and self-taught architect Jean Prouve designed a demountable house and the Maison Tropicale for export to France’s African colonies.

Many of these elements contributed to the decision to produce prefabs in the UK at the end of the Second  World War:

In the United States a number of innovative prefabricated homes were created. The architect Buckminster Fuller had worked on a version of his Dymaxion house in the late 1920s and revisited it in 1945. The Lustron house was developed by Carl Stranglund in 1948 using prefabricated enamelled steel sections – it was vermin proof and never needed painting inside or out! A number of these homes survive.

Today, full and part prefabrication is common in many buildings. In Greenwich, south east London, a fully modular 23 storey tower has been erected.

(1) THE PREFABRICATION OF HOUSES

A Study by the Albert Farwell Bemis Foundation of the Prefabrication Industry in the United States, revised 1951