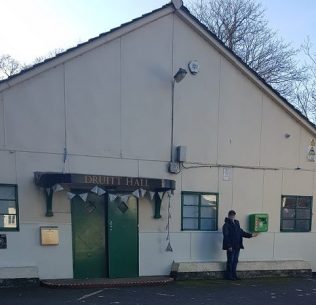 Chris contacted the Prefab Museum to ask if I could help with support for preserving their prefab community hall in Christchurch, Dorset, following a proposal to demolish it. The hall has now had a reprieve thanks to supporters and local councillors.

Druitt Hall was erected in 1953 using a pre-fab system developed locally. The hall is an adaption of the design used for some schoolrooms – presumably ‘HORSA’* buildings – and may be the last example remaining of its type. It was funded by public subscription and opened as part of the coronation celebrations.

The hall is sited within a town centre green space which was ‘gifted’ to the people of Christchurch and which, from that time, has been under threat of development.  Indeed, the first proposal by the local council was to turn it into a car park!  It seems to be a constant battle to preserve both the space and the building.

The prime mover behind getting the hall built was Mr Stanley Kermode.  His personal history is very interesting: his experience of childhood poverty drove him to campaign for and take practical steps to provide care and comfort for the elderly.  He was a local councillor and a founder of Christchurch Housing Society (still in operation today).  A carpenter by trade, he eventually became MD of local builders (Bryant & Trowbridge Ltd) who built the hall.  He had offered a ‘prefab’ bungalow solution to the local housing shortage in 1945 (see attached) which, I think, was not taken up by the council.

Mr Kermode responded to a call from the council in 1946 (Christchurch Times headline of 25/5/1946: “Builders urged by Council to help solve the housing problems of 1946”) by putting forward a scheme for 100+ ‘factory-built’ houses.  I believe the scheme was ultimately vetoed by Whitehall.  Anyway, the bungalow I referred to and provided photos for was a one-off private development (albeit of much the same construction.

Info on Mr Kermode’s system was featured in the Christchurch Times of 3 March 1945 (see https://www.scribd.com/document/94390033/Kermode-Bungalow-1945) and which paper had previously written about the Tarran pre-fab.

His company had been involved in erecting additional classrooms for schools in Hampshire and possibly Wiltshire.  I presume this would have been part of the HORSA programme.  They provided a locally-manufactured alternative to the precast concrete options to be ‘imported’ from further-afield.  The prefabricated timber-panels were not of themselves technically advanced but Mr Kermode, who seems to have had a very active mind, obtained patents for improvements to the system.  One was for the addition of interior ‘piers’ to provide lateral support to long walls.  The second was for a form of roof truss to facilitate a clear span over wider internal spaces together with an innovative vaulted ceiling design.

These features are employed at Druitt Hall, allowing a building of even greater width than the ‘standard’ layout shown on the patent, with the longer roof trusses being formed in bolted steel.  The rest of the structure is entirely in timber. The hall was built with public subscription in 1953 to commemorate the coronation and opened on 3rd June 1953.  In appearance the hall is very much like the concrete HORSA buildings more commonly erected (especially the Crittall windows and the roof coverings) and which have largely, if not entirely, been demolished.

* the name HORSA was used for the gliders that delivered troops across the channel (D-Day and on).  Named for an Anglo-Saxon king, many of these were built in Christchurch.  I mention it because I’ve seen another example of a pre-fab on YouTube.  A chap took some of these gliders and converted them into dwellings etc (at Send, Woking, Surrey).  I don’t believe it was a commercial success but does reflect the housing crisis post-war.  HORSA (Hutting Operation for the Raising of the School-Leaving Age) was also the name given to prefabricated buildings constructed to fulfill the need to accommodate more pupils after the Education Act 1944.