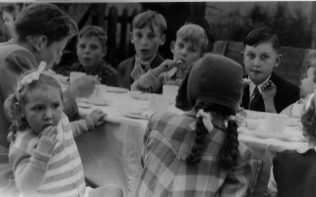 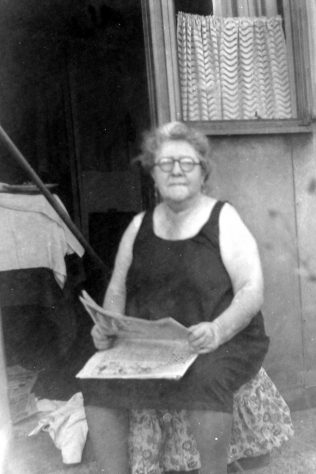 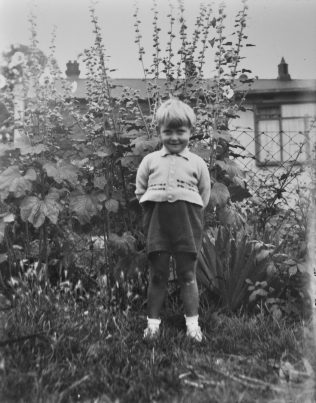 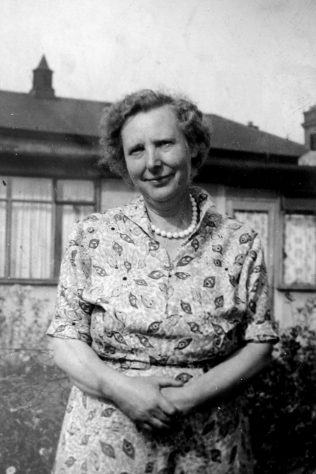 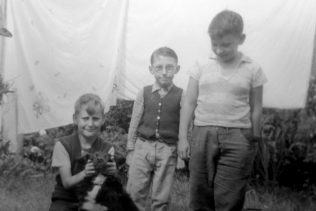 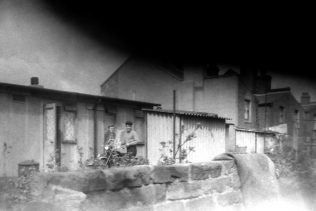 zoom
Lawrence Collins in his back garden in Avonley Rd. London SE14 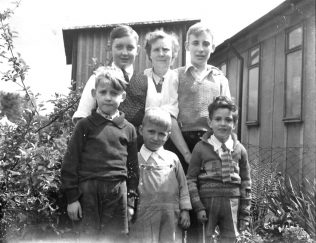 zoom
Cousin Mike left, my Mum then my brother Ernie. I am front left Roy Powell in the middle and Richard Davies right.

At the start of World War 2 my parents lived with my father’s parents in a large Victorian House in York Grove, Peckham. Unfortunately, their home was hit by a bomb making them homeless.

Earlier, the Nazis had tried to bomb New Cross Hospital but had missed and hit Reaston Street on the odd number side of the street. The council erected the prefabs on the site, hardly clearing the rubble. Consequently, our garden was so full of broken bricks we couldn’t even run a lawn mower over the grass. One day my brother and I were playing archaeologists and we started to excavate the cellar of the old corner shop that once stood where our garden was. Mrs Bowen who lived next door got all excited as she once rented the shop and lost her savings in the cellar.  We never got that far as my parents put a stop to it.

We had a large garden to play in. The council once had a shed on the corner itself and we took over the land when they demolished it.  We also acquired some of the garden belonging to Mrs Collins on the other side as she was too old to keep it under control. Despite the problems with the garden my parents loved living at 1 Reaston Street. It was the first time they had lived in a house with an inside toilet and bathroom. The prefabs had flat roofs so on occasion we did have water leak problems but they were easily fixed. The walls were a sandwich of two sheets of asbestos cement sheets with straw like wood shavings between. They were very robust though and resistant to impacts. They were not so good when it came to air rifle pellets though.  On one occasion my brother and I were having target practice with an air rifle firing at a row of bottles on a mound in the garden.  My mother came out with something on a saucer with a knife. “There” she said, “now you can use this filler to fill the holes in our wall”.  She had been sitting on the toilet in the prefab where our pellets had come through the wall.  There were only two bedrooms but there were 5 people living in it. At first it was my Nan and Granddad in the back bedroom and my mum and dad plus my brother in the front one.  Sadly my Granddad died before I was born. Nan still had the back bedroom but I joined the rest of the family in the front one.  The prefabs were warm dry and well thought out unlike the damp wind swept monstrosities we were moved to when they were pulled down. Since then there have been 3 blocks of flats erected on the site, all so sub standard that they have had to be demolished. The Excalibur estate however endured in excellent condition into the new millennium.

There was an excellent community spirit in Reaston Street everyone knew our neighours. My aunt, uncle and cousin lived at number 11 and another uncle lived round the corner near the Crown and Anchor pub. One of our neighbours , a man called Harold Bridges had a small holding somewhere in Kent where he kept pigs. Everyone in the street used to keep our kitchen scraps for him to feed to his pigs. Every Christmas he would give all those who did so a large joint of pork as a thank you.

When the Queen had her Coronation the street organised a large street party with residents providing all the food and drink. There were originally plans to erect a stage in the front garden of one of the middle prefabs. Bad weather forecasts killed off that idea at the last minute so the evening entertainment was moved to the All Saints Church Hall. In one of the photographs of the street party you can see the decking of the stage propped up against the fences.

Sadly, the Council didn’t care much for community spirit. When the prefabs were pulled down we were all split up and moved to all manner of locations. We were moved to a block of flats in Brockley that had severe damp and black mould problems; so much for progress.