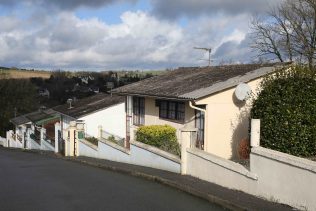 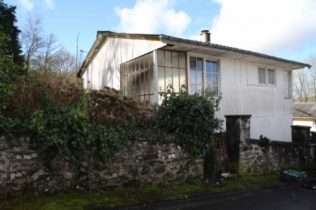 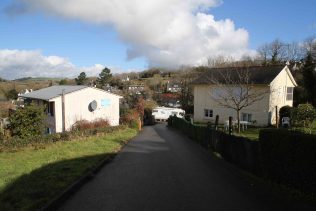 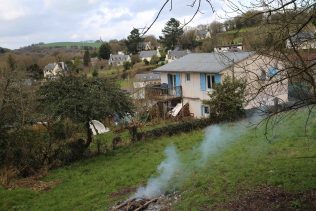 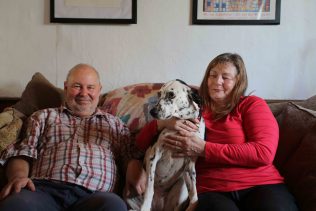 zoom
Liz and Malcolm and their dog Molly
Elisabeth Blanchet 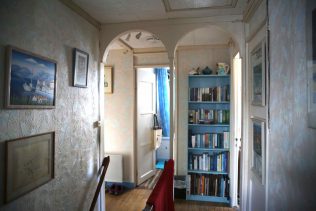 I was recently scouting for prefabs in Brittany with my friend Mickaël, the director of Mémoire de Soye – a micro-museum which has 3 re-assembled post-war prefabs just outside Lorient in Brittany.

He had spotted about 8 or 9 UK 100 (American type) prefabs in Carhaix, Finistère on Google street view and wanted to see them in flesh! We thought it would also be a good idea to meet two other associations from Brest who also focus on post-war prefabs in Brest. So we all met at one of Carhaix’s café and we went for a prefab walk!

We went to a first area and found the 9 UK 100 Mickaël had spotted. It was a sunny February day and the first resident we talked to, a lady in her 60s had toddlers all around her lovely prefab – she is a childminder -, was very kind and welcoming. She “only” arrived in her double storey prefab in the 70s but knew their history: they had been dismantled from an area in Lorient in 1957 – more than 154,000 prefabs were erected in France to rehouse people who had been bombed out – and been brought here in Carhaix to be reassembled on top of concrete basements and be used as social houses dwellings.

She also told us that there were only nine of them but many more, possibly forty a few hundred yards away!

I must say we got a bit overexcited and what we found just got us even more excited! About 40 UK100 all built on top of concrete basements were gathered on a small lovely hilly estate. Although they all had been altered and bespoke with time, you couldn’t miss the modern and innovative shape of the UK100…

Walking along the little alleys, we met Guy who was working on his car. He had bought his house fifteen years earlier, had done it up and knew perfectly where it was coming from. When I told him I had been documenting post-war prefabs in the UK for 15 years, he told us that there was a couple of early-retired Brits living just down the road from his’.

We decided to go and have a look. A man was working on his prefab’s balcony. We started to chat, in English. I showed him my Prefab Homes book and asked him whether he knew he was living in a prefab which was originally aimed at being exported in the UK?

He had no idea! And nor did Liz, his wife. They both had vivid memories of post-war prefabs in Bristol and Cornwall and had had families and friends living in them. I asked them if I could come back at some point to have a proper chat about their house, its history and how they are making it their lovely home –

Mickaël and I were lucky to be shown around and were amazed how Malcolm and Liz had succeeded in creating a charming and cosy home with a unique feel of England-.

They totally agreed and I came back three weeks later to record their memories and feelings about their unconventional Carhaix home: the video says it all: https://vimeo.com/214007769